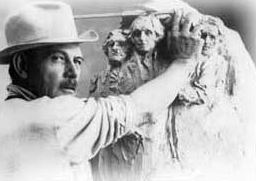 Gutzon Borglum was born March 25, 1867 in St. Charles, Idaho Territory, a Mormon community on the border of Utah.  His parents were Danish immigrants and his father, Jens, was a woodcarver married to both Gutzon’s mother, Christina, and her sister, Ida.   His father decided to leave the Mormon church and moved the family to Fremont, Nebraska taking only Ida as his wife.

Gutzon briefly attended college and worked as a machine shop apprentice, then went to learn sculpting in Paris, France.

He came to know Auguste Rodin who greatly influenced his style.

When he returned to America, he sculpted saints and apostles for the Cathedral of Saint John the Divine in New York.  In 1906, the Metropolitan Museum of Art purchased his group sculpture causing his reputation to soar.  He was an extrovert with a fascination with gigantic scale, heroic nationalism and uniquely American art.  He was a member of the Freemasons and the Ku Klux Klan.  He carved a bust of Abraham Lincoln from a 6-ton block of marble which can now be found in the U.S. Capitol Crypt in Washington, D.C.  He became renowned for winning a competition for a statue of Civil War General Philip Sheridan, beating more established artists.  He learned the necessary techniques for sculpting on a gigantic scale through a failed project to carve a memorial to Confederate heroes on Stone Mountain in Georgia.

When Gutzon Borglum died of complications from surgery in 1941, his son completed the project leaving the hidden chamber unfinished.  In the 1990’s, the chamber room was finally completed and was stocked with panels featuring American history , the Declaration of Independence, the Constitution, and the Bill of Rights.  Also added, prior to locking the titanium vault, was a biography of Gutzon Borglum.