The History of the Boise Philharmonic

In the 1880s, when Boise was just a small community of about 2,000 people, a local violin maker named Adolph Ballot decided the town needed an orchestra.  So, in 1890, with the help of Mr. Pasmore and M. A. Swift, Ballot established the Boise Philharmonic Society and turned a few frontier musicians into a music community.  Ballot also opened the Boise Conservatory of Music to train musicians, and by 1898, the orchestra had grown to full instrumentation.

In 1916, Albert Tompkins conducted the Philharmonic’s first performance of Handel’s Messiah.  The Messiah is still performed every year to this day.  By the 1950s, orchestra concerts became a regular event on Boise’s social calendar.  In 1960, Jacques Brourman became the conductor, and during his tenure, merged the orchestra with the College of Idaho Orchestra. He also raised the bar on performances by presenting larger scale works of increasing quality and diverse artistic expression.

In 1967, holocaust survivor Mathys Abas took over as conductor and began taking the orchestra on tours to outlying Idaho communities such as Orofino, Wallace, Nampa, and Caldwell.  The orchestra also performed on KIDO radio and expanded their audience base beyond concert ticket holders.

Sold-out seasons throughout the 1970s caused the Boise Philharmonic to add more concerts to facilitate greater attendance.  When the Velma V. Morrison Center for Performing Arts opened in 1984, it became a primary venue for increasingly professional Philharmonic performances.  The orchestra also played Pops concerts at the Ste. Chapelle Winery, Art in the Park, and at the opening of the Boise Town Square Mall.  In 1992, the Philharmonic even backed Boise’s own jazz icon Gene Harris.

Over the years, the Boise Philharmonic has had many names.  Originally it was the Boise Philharmonic Society, then Boise Symphony Orchestra (1916), then Boise Civic Symphony Orchestra (1950), and finally Boise Philharmonic Association, Inc. (1960).  As Idaho’s oldest performing arts organization, the 80+ member orchestra performs for over 50,000 people annually in concerts at the Morrison Center, NNU’s Brandt Center in Nampa, in schools around the state, and in smaller recital halls and venues.  It performs 14 Masterworks concerts per season, along with a variety of “Pops” concerts, a chamber music series, and other symphonic events.  The mission of the Boise Philharmonic Association is to musically enrich, entertain, and educate through community engagement and music performance at the highest level. 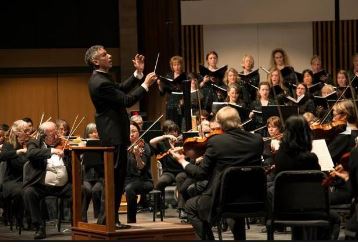