History of the Simplot House 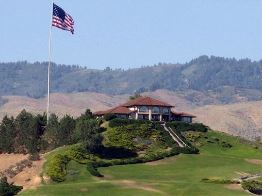 The Simplot family made a decision in 1910 to move 1000 miles west of their home in Dubuque, Iowa to a homestead in the newly irrigated Magic Valley of Idaho.  That decision would impact Idaho history.  Their son J.R. would grow up to be a billionaire in the potato business.  When he was 14 years old, J.R. had differences with his authoritarian father and left home without finishing 8thgrade to work on a farm in Declo.  At the age of 19, the flip of a silver dollar gave him his partner’s half of an electric potato sorter.  The machine sped up work enough that his neighbors eagerly sought his services. One sorter led to four, one potato shed to 33, and an empire was born - the J.R. Simplot Company.  Two years later, J.R. proposed to Ruby Rosevear of Glenns Ferry in his Model A Ford; they had met on a blind date.  They had 3 sons and one daughter and while Ruby was raising the family, J.R. was becoming the largest shipper of fresh potatoes in the nation.  In 1947, J.R. bought 2,200 acres of undeveloped land in the Boise foothills for $5 per acre.  In the 1950s, he was the benefactor to fledgling Bogus Basin ski area when it had financial difficulties and the base area lodge was named in his honor.  In 1960, his wife left him and he realized that he had not spent enough time with his family while becoming one of Idaho’s richest potato farmers.  Butch Otter was working on a road construction crew in McCall, Idaho, when he first laid eyes on J.R.’s 18 year old daughter Gay driving a little sports car.  A year later, Gay wed Butch Otter despite family protests that she should marry wealthy.  Butch went to work for the J.R. Simplot Company making french fries, shoveling potatoes and loading boxcars with frozen fries. In 1967, J.R. made a deal with Ray Kroc to supply frozen french fries to the McDonald’s fast food chain.  Thanks to J.R.’s technology, by 1972 all fries were now frozen and he expanded his potato processing plants and built a new one in Hermiston, Oregon.  That year he also married Esther Becker, a former opera singer who he had met on a business trip to New York in the mid 1960s.  The next year, he retired as president of his company but remained chairman and six years after that, his son-in-law Butch became the president of Simplot International.  In 1979, J.R. built a Mediterranean style villa on his Boise acreage, on top of a prominent hill in what had become the Highlands neighborhood of North Boise just above Bogus Basin Road…4000 Simplot Lane.  The 7,370 sq ft house included 2 bedrooms, 2.5 bathrooms, a library, a main kitchen, a caterer’s kitchen, and a dining room on the main level and an office, bathroom, entertainment area and formal dining room upstairs.  The 3 point Simplot logo was etched on the windows flanking the front door.  J.R. and Esther each had monogrammed boot jacks mounted in the garage.  The house was visible for miles, and was dubbed "Fort Simplot" by neighbors who said it resembled a Boy Scout camp.  Once the house was completed, he erected a flag pole flying a 30x50 foot American flag over his mansion.  Neighbors soon complained that the noise from the flag disturbed their sleep at night, so he responded by raising the flag pole to 100 feet. Billionaire J.R. Simplot donated his North End hilltop mansion, worth $2.8 million, to the state of Idaho for use as a governor’s mansion with the sole condition that the enormous flag continue to fly over the house.  Governor Dirk Kempthorne accepted the donation and launched a $3 million private fund raising effort to renovate the interior.  He also planned to sell naming rights to various rooms to make the house a showcase for Idaho industry as Glancey Rockwell & Associates created a plan to remodel it to 12,000 square feet.  Two years later, Governor Kempthorne resigned to become Secretary of the Interior under Pres George W Bush.  The Simplot mansion plans were never implemented under his successor, Jim Risch.  Then J.R.’s former son-in-law Butch Otter was elected Governor of Idaho and declined to live in the Simplot mansion. In 2008, moments after inviting a friend over to play cards, J.R. Simplot died suddenly with his wife by his side.  He was recovering from a bout of pneumonia at the time.  He was buried in Morris Hill Cemetery.  The fund raising campaign for the Simplot house had sputtered out and the $100,000 annual cost of maintaining the lawn was depleting funds.  Butch Otter, receiving a state allowance of $58,000 per year to live on his 70 acre ranch in Star, said he would stop taking the allowance once the state finished minimal renovation on the mansion, but would still not live there.  State officials concluded that renovating the mansion would cost much more than expected and assessors decided it was worth 25% less than initially estimated.  It cost the state $30,000 per year to keep the lights on and $12,000 more for janitorial services.  The mansion was returned to the Simplot family and remained vacant. In 2016, the Simplot mansion was demolished and an era ended.  The flag is still waving at the top of the hill and children are still allowed to sled down the hill in winter or slide down on ice blocks in the summer.  The family has no immediate plans for the site.

JR Simplot was a great and generous man. Sad that the house was not preserved and left as a monument to what self-determination and hard work will/can net. Oddly enough all the people JR uplifted in the end could not see his wishes carried out. The man, the legend and his accomplishments continue to live on with Esther Simplot sponsoring the Performing Arts Academy and the JUMP center downtown.

I am trying to find out if Esther's Highland Stables are still standing on the property.