In 1891, Christopher W. Moore moved to Warm Springs Avenue and founded the Boise Artesian Hot & Cold Water Company, which utilized the Kelly Hot Springs as its water source.  He then enlisted the help of John C. Paulsen to design a hot water bathing resort—The Boise Natatorium.

The Natatorium, also known as “the Nat,” opened in 1892 and was constructed for $87,000, which in today’s economy would have been over $2,100,000. It featured a grand 125-foot long pool which remained at a perpetual 98 degrees with an artificial waterfall, 40-foot lava rock diving platform, and a two-story copper slide.  In addition, the resort had a dining room, clubrooms, a saloon, gymnasium, dance floors, card rooms, tearooms, baths, and a mezzanine that ran around the entire pool. The Nat became such a popular attraction that in 1901, the pool was transformed into a dance floor surrounded by hanging ferns for Idaho’s first Inaugural Governor’s Ball for Frank W. Hunt.

The exotic architecture of the building resembled a Moorish revival, which stood out from the popular Queen Anne “gingerbread” style of the time. With its six story towers and keyhole arches, the all-wooden Natatorium made a grand architectural statement. Eventually, the steam rising from the hot water caused its wooden beams to rot.  During a windstorm in 1934, one of the large beams fell down into the pool.  Fortunately, no one was hurt. But, the building was condemned and demolished, and the geothermal water supply was cut off.

Soon after, The City of Boise purchased the pool and reopened the resort with a new building which had a much simpler design than the first.  The 12-foot deep Natatorium pool still remains in its original location at 1811 E Warm Springs Avenue and now has a large waterslide known as “the Hydrotube.”  The City is currently trying to reconnect the geothermal water line to this historical Boise landmark. 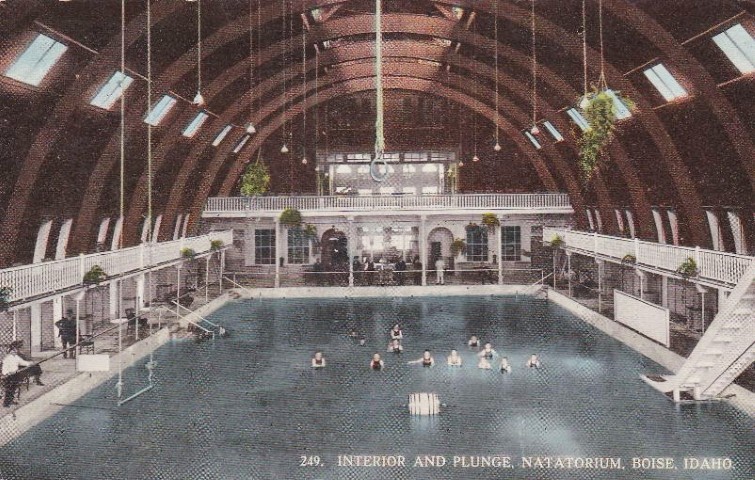