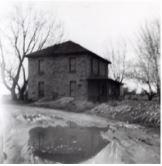 The Bown House, located in front of Riverside Elementary, is an Idaho landmark I pass almost everyday.  This past week, my oldest daughter, Hadley, was able to visit for a field trip and share what she learned about this unique property.

In 1841, at the age of 12, Joseph Bown immigrated with his family to America from England.  He grew up in Illinois, married Temperance Hall, and moved to Iowa to start a farm and a family.  In 1862, Joseph  took a wagon train west and ended up with a gold claim in Idaho City.  When his efforts at gold mining failed, he moved to Boise and spent the next few years establishing one of the first ranches in the Boise Valley.  As soon as he was able, he moved his wife and seven children to Idaho as well.  They lived in a log cabin, farmed their ranch, and saved their money until they were able to build a new house in 1879.  The large and luxurious home, known as the “block house,” was built from local sandstone and was set on the highest site in the area, providing sweeping views of their 240 acre ranch.

In addition to raising their family there, the Bowns also used their home as a school when a nearby school burned down.  Many parties and dances were held there.  In 1893, the Bowns moved to a new farm.  The house transferred ownership a few times until 1987, when the Independent School District of Boise purchased it to use as office space.  In 1991, the school district entered into a stewardship agreement with Preservation Idaho to restore the house and make it the centerpiece of the heritage education program.  The house remains as such today.  It is open for tours the first Saturday of each month from 1pm-4pm and is the namesake of the mixed-use Bown Crossing neighborhood. 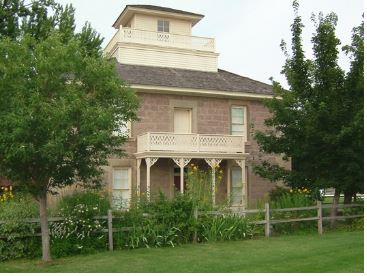