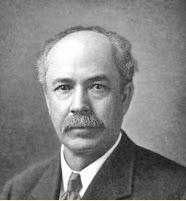 Dr. George Collister was one of Boise’s greatest philanthropists. He was born October 16, 1856, in Willoughby, Ohio, to the family of a Scottish immigrant from the Isle of Man.  In 1881, twenty-six year old George was advised by his sister, Julia, to move to the “up and coming” town of Boise.  He took her advice and developed a large and prosperous medical practice in the area—specializing in pediatrics.  He served as a doctor to the city, county, and state penitentiaries, was a member of the Ada County Medical Society and the American Medical Association, and was one of the doctors involved in the detailed assessing of Rocky Mountain Spotted Fever.

In addition to his medical work, George worked in the cattle business and cultivated orchards of peaches, pears, and prunes in Northwest Boise.  Also, he owned a flower shop at Hotel Boise where he sold flowers from his own garden.  He and his sister, Julia, had extensive real estate holdings around a railway stop that came to be called “Collister Station.”  In 1900, he and his wife, Mary Elizabeth, owned a home at 311 7th Street in Boise and hosted 16 boarders– a dentist, a Canadian miner and his wife, an Irish grocer with his wife and daughter, another grocer, a young woman, a lawyer, an electrician, two real estate agents, a mining superintendent, an electrician, a school teacher, and a music teacher.

In 1910, George donated 150 acres for the construction of Collister Elementary School, which was built in the land around his prune orchard.  He also gave land and cash to the Presbyterians to build a county church with stipulations that it be built of brick, on a $2,500 budget, and be completed before Jan 1, 1913.  Around this time, Dr. Collister and his family moved to a modest (20 room) mansion – the Idaho Statesman said “The palatial home to be constructed for Mr. and Mrs. George Collister …will be one of the best designed and most complete homes ever built in Boise.”  Although George and his wife had no children themselves, they did adopt a baby daughter when one of George’s patients died in childbirth.  In October 1935, Dr. George Collister died of a cerebral hemorrhage at the age of 79 in St Alphonsus Hospital and was buried in the Morris Hill Cemetery.  This Boise pioneer was generous and kind and is honored to this day by Collister Drive, Collister Elementary School, and the Collister Neighborhood Association.

Does anyone know who this adopted daughter was? She's not listed on the obituary info for George or his wife, Mary Elizabeth.

Here is the information I found on another site. Hope this helps =-) : Dr. and Mrs. Collister had no children of their own. However they adopted a baby girl who became Mrs. Pat (Edna) Scovell of McMinnville, Oregon. They also had three granddaughters and a grandson. The oldest, Mary Elizabeth, named for her grandmother, passed away at age 39. The others are Mrs. Pat Byers of Meridian, Mrs. Joanne Newson of Vancouver, Washington, and Mr. George Scovell of Salem, Oregon.

Edna Scovell, the adopted daughter of Dr. Collister, was my grandmother. My father was George Scovell. I have a lot of the written history, photos & furniture from the Collister estate.

Also, George, Patricia, & Joanne have all passed. Correction to Katie's info Joanne's last name was Nelson. It was rumored that the Collisters did have a son but that he was killed in a hunting accident at a young age.