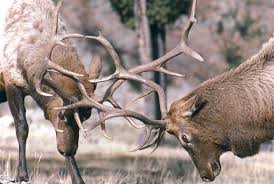 Years ago, I was visiting a tiny Alaskan junction town. There was little there besides a locally-owned fill station. Out in front, there were the skulls of two caribou, whose antlers had been interlocked in a battle, never managing to be separated again. They had likely engaged in an instinctual fight, over territory or a female. The vast majority of the time, the victor was the one less injured, less tired, and willing to stand their ground the longest. The other would simply concede, and all would return to normal.

In their case, though, the butting of heads had ended up a permanent conundrum, that led to their death, not before a fair amount of struggling and suffering. They’d found themselves stuck together in a fighting posture — unable, we can assume, to make amends, concession, or establish domination.

I felt sadness as I pondered this unfortunate set of skulls. Mostly because I imagined the days of torture once they’d become intertwined; before the last one standing died. As one would’ve moved, the other would have protested. As one longed to eat, the other would have pulled their conjoined heads away. The conflict would have prevented any progress or sustenance of life. Eventually, one would have become too thirsty, unable to convince the other to cooperate toward a water source. Or perhaps their struggle broke a neck. But, one no doubt died before the other, leaving the survivor to carry the heavy corpse of the other until they simply were forced to lay down and succumb to their own unavoidable demise. What a sad picture. What a way to go.

We sometimes engage in our own head-to-head combat in our relationships, always running the risk of entangling without solution. This can be a natural human tendency of cohabitating with a different person, who has a different set of preferences and opinions. Conflict is unavoidable, to some degree. But God never intends His people to remain in confrontation. He has established and exemplified ways for us to reach reconciliation with one another.

We are not peacemakers by nature. From the time sin entered the world, we have been born with a much stronger tendency to “look out for number one” than to consider the viewpoint of others, or to fight for their advantage over our own. Although many of us hate open conflict, this doesn’t exempt us from stewing within with resentment toward others. To overcome this sin and achieve restoration in relationships, we need the Holy Spirit -- the same power that made Jesus not obligated but willing to endure the cross for the people who had wronged Him terribly. When relying on this power instead of our own, we can be peacemakers, because the greatest peace has already been accomplished on the cross (Colossians 1:19-22).

2 Corinthians 5:18-20 calls us ambassadors for Christ, specifically here in the area of reconciliation. Because of this, we cannot hold unforgiveness as a right, even when offering it seems to go against our nature and desire for justice. Far from harboring resentment, God calls us to seek peace immediately (Ephesians 4:26). He died to create grace where there was none, and to extend to us the same call as we relate to others in conflict. This, we realize, is more than just an unfortunate duty we have as believers, but a profound privilege. We see that as the power of forgiveness frees us from carrying the deadly weight of bitterness and hurt. When we are forgiven in such a way, we are humbled and driven toward repentance. Grace is a power much stronger than our differences and disputes.

Christ’s kind of love is unconditional. It is not hindered and does not even consider the things we are prone to weigh heavily, like cultural, political, and societal barriers. We see that modeled in the story of the Good Samaritan, as well as the entire ministry of Jesus. In a climate like the one we currently live in, where these barriers become polarizing, it is only the power of the gospel of grace that can bring reconciliation.

The church is called to stand apart from the world in how we handle conflict. Nowhere is it suggested we must do the impossible and avoid conflict altogether, but instead approach the situations full of the grace God has poured out on us, willing and eager to extend it to others.