History of the Boise Train Depot

As railroad lines began to revolutionize travel and the moving of goods across the country, two railroad lines, the Central Pacific and the Union Pacific, agreed that they would build towards each other until they connected.  Central Pacific started in Sacramento, California and moved eastward.  Union Pacific started in Chicago, Illinois, and moved westward.  On May 10, 1869, they met and were joined by a gold spike in Promontory Point, Utah.  Then, Union Pacific moved into Oregon and Idaho where it began shipping the local natural resources to other parts of the country.  In 1881, the Oregon Short Line Railroad was incorporated as a subsidiary of Union Pacific Railroad.  Railroad construction roughly followed the Oregon Trail until Boise was finally connected to the rest of the railroad by a branch line from Nampa, and Boise's first depot was built a short distance from the present building in 1887.  Six years later, Oregon Short Line built a depot at 10th & Front.

In 1922, a contract was signed between Oregon Short Line and the Boise Chamber of Commerce to provide "through train" service via Boise.  Plans were prepared by New York architects Carrere, Hastings, Shreve, and Lando for the current Spanish colonial style depot which was built by Cherdon Construction Co. of Salt Lake City.   Construction went on for nine months.  In 1925,  thousands turned out to see the first transcontinental engine pull into the station, to listen to dignitaries give speeches, and to watch the parade wind its way through the city.  The Depot was heralded "the most beautiful structure of its kind in the West."  A few years later, additions were added by Union Pacific.  Included in those additions were the Platt Gardens, which were designed by Spanish landscape architect Ricardo Espino, and the bell chimes from Meneely Bell Co. of New York, which were added in memory of UP's leader E. H. Harriman.

By 1948, six trains came through the depot each day.  The most popular was the Portland Rose with service to Chicago, Illinois and Portland, Oregon.  Over the next fourteen years, railroad travel peaked and then waned.  The decline in rail passengers led to the closure of the Barkalow Brothers news stand in 1962 followed shortly in 1968 by the US Post Office’s discontinuation of mail freight on the Portland Rose.  By that time, air mail service had become the new means for postal delivery.  Just four years later, in 1972,  the last Portland Rose passenger train pulled out of the station.

In 1974, Union Pacific Boise Mainline Depot was placed on the National Register of Historic Places and remained vacant for the next three years.  In 1977, Amtrak began the Pioneer passenger train with service to Seattle and Salt Lake City which ran for ten years and then at a lessened service capacity for another ten years.

In 1990, the Morrison Knudsen Corporation purchased the Depot from Union Pacific Railroad.  They spent $3.4 million restoring it back to its original glory in addition to putting in a well and air conditioning.  A ribbon cutting ceremony was held on February 5, 1993.

After the renovation, the City of Boise decided they wanted to purchase the Boise Train Depot.  In order to raise the money, they underwent a six month fundraising campaign whereby donors purchased bricks inscribed with their names.   These bricks were then used to create a path in front and behind the Depot.  In 1996, the City of Boise took possession of the beautiful white building on the Bench, which will hopefully remain a well-kept and cherished historical landmark of the city for many years to come!

Although train service was forever discontinued in 1997, the Boise Depot remains open to the public on Sunday and Monday from 11am to 5pm.  It also serves as a desirable venue for weddings, private parties, and community events.  On August 2, 2002, it served as the location where Luke and I committed to love and serve each other until death do us part.  Needless to say, the Depot is a special place to us and reminds us of our wedding day each time we have the pleasure of passing it. 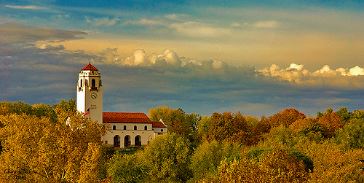