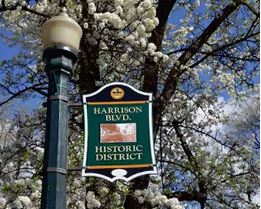 On July 3, 1890, President Benjamin Harrison signed the Admissions Act which established Idaho as the 43rd State in the Union.  At the time, what is currently Harrison Boulevard was humble 17th Street.  The land that the street is on was originally owned by Jacob Mendenhall who received it from President Ulysses Grant.  It was purchased by lawyer Jeremiah Brumback who added the “Brumback Addition” to Boise City’s original townsite.  When the City Council learned that President Harrison was coming to visit Idaho, they and Mr. Brumback decided to rename 17th Street to Harrison Boulevard in honor of the 23rd President.  The President arrived in 1891, and while here he planted an oak next to the Capitol. The street was designed to be a sweeping and stylish boulevard rivaling its more sophisticated sister arterial street, Warm Springs Avenue.  Boise was booming in the first decades of the 20th Century and many of the City's most prominent citizens built their homes on the Boulevard, resulting in a great collection of architectural styles.  Harrison Boulevard became one of Boise’s most picturesque thoroughfares, featuring a 1916 addition of street lamps at every intersection that bookend median park strips filled with flowering trees.  The City Engineer called Harrison Boulevard a “model road.”  McAuley Park anchors the boulevard at the south end, with Hill Road and the Harrison Hollow commercial district to the north. By the 1930’s, Boise had become a bustling capital city and Harrison Boulevard was associated with the city’s wealthy.  It boasted well-known residents such as the Simplots, former mayor & prominent businessman W. E. Pierce, and Governor William Davis, along with entrepreneurs, merchants, engineers, and physicians. In 1980, the Boulevard was listed on the National Register of Historic Places and in 1989, it was designated as a local historic district by Boise City. Harrison Boulevard remains a gorgeous venue of the distinctive North End.  In recent years, it has become one of the busiest Halloween hot spots in Boise.  Homeowners decorate elaborately and the street is packed with trick-or-treating families creating a mile-long Halloween party.