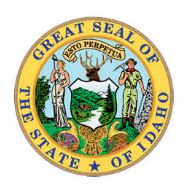 Idaho became a territory in 1863, at which time the first Seal of the Territory of Idaho was adopted as drawn by Silas D. Cochran, a clerk in the office of the Secretary of State.  Governor Caleb Lyon was dissatisfied with Cochran's design, however, and decided to submit his own.  Lyon's design was accepted in 1866 and, although controversial, it served as the official seal of the territory until Idaho reached statehood in 1890.

With its new fresh “State” status, the First Legislature of Idaho thought it time for a fresh seal as well.  So, in 1891, they sponsored a State Seal Design Competition, offering a prize of $100 to the winning artist.   Despite stiff competition against artists from all over the country, the judges unanimously selected the design submitted by Emma Edwards Green (above).  Upon presentation of the award by Governor N.B. Willey, Emma became the first and only woman to have designed the Great Seal of a State.

Emma was born in Stockton, California, the daughter of a former Missouri governor and a French Creole beauty.  She was the eldest of eight children and exceptionally educated for a woman of her time.  After spending a year studying at the Arts Students League of New York in 1890, she stopped in Boise to visit friends along the way back to California.  She fell in love with the area, and her visit to the city turned in to a lifelong stay.  She made her living in Boise teaching art classes to the pioneer community.

When invited to submit a design for the State Seal of Idaho competition in 1891, Emma thoroughly studied the resources and opportunities that made her new home state unique.  Her winning entry depicted a miner decked in the typical gray-brown mining garb of the day, holding a pick and a shovel.  The miner stood next to a ledge of rock with pieces of ore scattered at his feet to represent the chief industry at that time.  Emma added a woman clothed in a white gown (representing Idaho as a virgin state) with wheat growing up to her shoulders and Syringa (the state flower) growing at her feet. As a nod to Women’s Suffrage, she drew the woman holding a scale to represent justice, gripping a spear with a liberty cap to represent freedom, and standing at the same height and level of the miner to represent equality with men.  Between the miner and the woman, she drew a shield depicting the Snake River flowing between mountains with a pine tree on the bank to represent Idaho’s immense timber interest.  On the opposite bank of the river, she drew a farmer plowing a field to represent Idaho’s agricultural resources.  Emma placed the shield upon a sheath of wheat flanked by two cornucopias (horns of plenty) and drew an elk’s head rising from the top of the shield to represent Idaho’s game laws.  Finally, she added a star to represent a new star in the galaxy of states.

In 1957, the Idaho Legislature approved an updating of the seal.  The new version was painted by Paul B. Evans, who removed a bit of the detail from Emma’s version and added a banner at the top that said “Esto Perpetua” (Let It Be Perpetual). The flag of the State of Idaho now consists of the updated version of the State Seal on a field of blue. The words “State of Idaho” appear in gold letters on a red and gold band below the seal.