The History of the Old Idaho Penitentiary 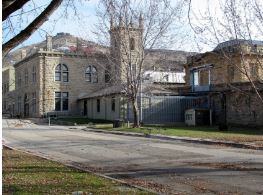 On March 4, 1863, President Abraham Lincoln signed an act that created the Idaho Territory, sprawling across an area one-quarter larger than Texas.  This frontier land was lawless and in order to obtain its statehood in the Union, it needed a place to hold the dregs of society and reform others…a prison.  In 1870, the penitentiary began as a one-cell house, known as the Territorial Prison, built east of Boise.  It received its first 11 inmates from the Boise County Jail.  It quickly grew into a complex of buildings surrounded by a 17 foot high sandstone wall.  As part of their penance, the prisoners mined nearby rock quarries to build the very walls that would hold them captive.  Over its 101 years of operation, it received more than 13,000 inmates (215 of these were women), with a maximum population of a little over 600. At least 110 of them died inside from old age, illness, and murder.  The area now known as the Rose Garden was once used to execute prisoners by hanging.  Of the 10 executions in the Old State Penitentiary, six occurred here.  There is also an outdoor Recreational Area where inmates boxed and played baseball, basketball, handball, tennis, horseshoes and football.  The baseball (and later softball) team was named "The Outlaws" and frequently played teams from across Treasure Valley.

The Old Idaho Penitentiary is currently managed by the Idaho State Historical Society.  It features 30 historic buildings and special exhibitions, including a collection of tapes and transcripts from oral interviews with fifteen former prison guards covering prison operations and remembrances from the 1950s to the closing of the prison. The collection is open for research at the society.  Also, J.C. Earl donated his personal collection of historic arms and military memorabilia to the state of Idaho which placed them on exhibition at the Old Idaho Penitentiary.   They range from the Bronze Age to those used today for sport, law enforcement, and military purposes.  Still today, events and programs provide families, school groups, and visitors an opportunity to relive the Old Pen's exciting past of daring escapes, scandals, and executions.