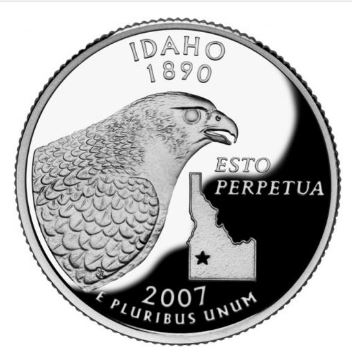 Idaho was granted statehood on July 3, 1890.  Since its beginning, our state has been known for its mountainous landscapes, rivers, lakes, and streams.  Over the years, Idaho’s government has designated a variety of official symbols to further shape our identity.

Below are a few of these symbols along with the years they were officially adopted:

1890 – The Great Seal of Idaho was adopted.  The seal was designed by Emma Edwards Green, the only woman to design a state seal.

1931 – The Mountain Bluebird was designated as the state bird.  Plentiful in our mountains, they prefer an open habitat and can tolerate colder winter temperatures.

1931 - The Syringa was designated as the state flower.  Mentioned in the journal of Meriwether Lewis, it was used by Native Americans for tools and soap.

1935 – The Western White Pine became the state tree. It can be found in the northern part of the state around Coeur d’Alene.

1957 – The state flag was adopted.  The design consists of the state seal on a field of blue with the words “State of Idaho” printed in gold letters on a red and gold band below the seal.

1975 – The Native Appaloosa became the state horse.  Sporting colorful spotted coats, they came here with the Spanish Conquistadors in the early 1500s.

1988 – The Hagerman Horse skeleton became the state fossil.  Said to be 3.5 million years old, it is the oldest known representative of the modern horse genus and is believed to be more closely related to the living Grevy’s zebra in Africa.

1989 – Square dancing became the state folk dance.  It provided our pioneers with recreation and social contact with their neighbors.

2000 – The Huckleberry became the state fruit.  It’s a favorite of bears and grows well at our elevation but is not successfully grown commercially.

2002 – The Potato became the state vegetable.  Our climate produces high quality potatoes that have made our state famous worldwide.

2015 – The Giant Salamander became the state amphibian.  It matures to 13” and keeps to dark places such as underneath logs.