Boise Mayor, Walter E. Pierce, a successful real estate promoter from 1890 to 1930, wanted to attract buyers to the outlying areas of Boise. So, he created the Boise & Interurban Railway which ran six miles west of Boise to his 185 acre picnic location, Pierce Park. Opened in 1907, the park was located on Valley Street, which is now State Street. Visitors entered the park through a large archway where they paid an all inclusive fee to get into the fully fenced grounds and utilize the facilities. A year after the park opened, a bandstand, tennis courts, croquet plots, and a refreshment stand were added to the array of enjoyments the park had to offer. In 1908 a man-made lake was added for row boating, and, in 1912, a dan

ce pavilion was built. It is no wonder it was the main leisure park destination of its day. In 1915, ownership was transferred to Idaho Power. And then, in 1928, the railway line 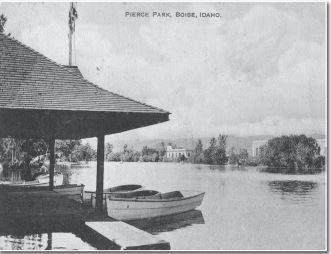