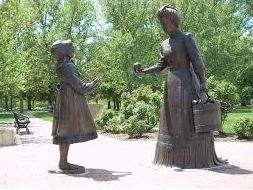 In 1862, Thomas Jefferson Davis and his brother Frank left their home in Cincinnati, Ohio to pursue their dream of striking it rich in the Idaho Territory gold rush.  They mined a less than profitable claim in the area for a year before building a cabin on the site of present day Julia Davis Park.  Shortly after, Fort Boise was established and the Davis brothers joined a town company to develop the planning of the City of Boise.  Thomas also planted 7,000 apple trees on his land along the Boise River.  In 1869, he met Julia McCrumb, a Canadian in town visiting her uncle, an Army surgeon at Fort Boise.  They wed in 1871, worked their orchards and heavily engaged in philanthropy.  In September of 1907, Julia died of typhoid fever.  Thomas donated 40 acres of their land to the City of Boise in memory of his beloved wife of 36 years. His stipulations were that it would forever be known as Julia Davis Park and that it would revert back to Davis heirs if it was ever used for anything other than public use.  Thomas Davis died the following year.  General development plans were created in 1912 and over the years park attractions were added.  In 1916, The Boise Zoo (now known as Zoo Boise) was built when an escaped circus monkey was found in the desert near Mountain Home.  Other notable improvements were a band shell (1928), a rose garden (1939), expanded borders (1940 - Broadway Avenue to the east, Capital Boulevard to the west, the Boise River to the south, and Myrtle Street to the north), Idaho Historical Museum (1950), the Boise River Greenbelt (1966), the Boise Gallery of Art (1972 – renamed the Boise Art Museum in 1986), the Idaho Black History Museum (1998), and Julia Davis’ statue (2002).  Today, it remains the setting for the city’s major cultural institutions and Phase I of the new “Rotary Grand Plaza,” a venue for large events, is nearly complete.